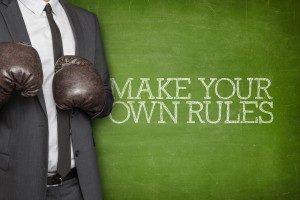 Being a “failure” was not widely considered bad until the Great Depression.

Until that moment in history, people’s identities were more fluid.   “Oh well, he wasn’t a good farmer, so he’s a hat maker now.” There was no sense of failure, just change.

Some people come to me and confess that they’re afraid.  “I’m on the verge of failure, and I’m terrified.”

I’m struck by how powerfully people react to the idea of failing, but it comes as no surprise.  Our culture has the wrong idea about failure.  We fail to celebrate failure.

Too many mangers and teachers and parents focus on telling people HOW to do things—and end up judging the process rather than the end result.

Maybe I do things differently than other people, but if the answer is right, does it really matter how I got to it?

When I was in high school, I worked ridiculously long hours, but I could never quite keep up.  Every semester, I would fall behind. My guidance counselor would call me into the office, puzzled.  “I don’t get it.  You’re a screw-up, but you’re so smart.  You need to get it together.”

Meanwhile, I was working my butt off.

I didn’t quite get it either.  I was working twice as hard as everyone else, and I still couldn’t cut it.  Yet, I knew that I wasn’t dumb.  I was smart, but I wasn’t good doing things according to the “right” process or procedure.

As an adult, I learned to embrace flexibility, to do things my own way.  And now that I use my own approach, I almost always get it right.  Success comes to me—and I think to many people—through  “failing.”

I’ve learned that taking flexibility out of any system is always bad.   Whether it is how you view yourself or how you do your job, keep a sense of flexibility, a limber mind, a willingness to change.

It’s no surprise to me that, in today’s economy, that’s the advice that all of the major analysts are giving.  Stay flexible.

If you feel that you would benefit from working with a life coach, or career coach, please contact Carroll King Schuller today at 804-288-0099.